Technique Book 3 delves into the world of scales, chord inversions, and chord progressions. Students learn these common pianistic patterns gradually in the keys of C Major, A Minor, G Major, E Minor, F Major, and D Minor. As they are learning these patterns, they are exploring pieces in their Repertoire Book 3 in the same keys, and practicing using these keys in their Sight Reading Cards as well.

Our motto in Technique Book 3 is “Mastery through repetition.” Students become fluent and increase their tempo in scales by building up gradually through repetition. By the end of the book, they should have mastered these basic building blocks of music, so it is time to celebrate by playing the Technique Extravaganza. 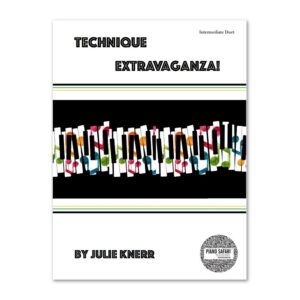 The Technique Extravaganza is a student – teacher duet at one piano that reviews scales, chord inversions, and chord progressions in the keys studied. It is the last piece in Technique Book 3, but is now also available as a Print and Digital Sheet. The idea for this piece came from Beethoven’s Two Preludes through All Twelve Major Keys, Op. 39. Beethoven makes his way rather crazily through all the major keys. In my college counterpoint class we called this type of thing “Modulating wildly for no apparent reason.” According to our professor, we all did this often in our composition exercises!

I decided to write the Technique Extravaganza in honor of Beethoven by having students review their technical patterns in all the keys they had studied. This flashy and fun piece will have students excited to play their technical skills! Here is the first page of the teacher and student parts. 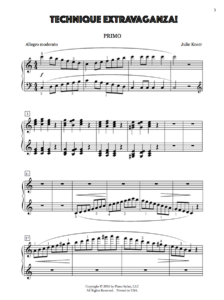 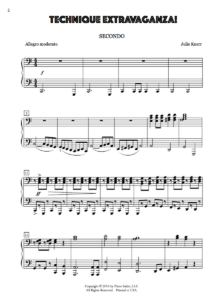